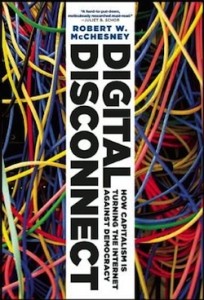 Globally, Internet for telecommunication has become immensely popular and has been impacting almost all respects of human life in major ways. As author Hassan (2004) defines in his article, What is the Network Society? Media, Politics and the Network Society, that the Network Society is formed when there is a growing number of people connected to the Internet “and make it a ‘society’ (p.10). This is because “internet is the fabric of our lives” and distributes “the power of information throughout the entire realm of human activities” (Hassan, 2004, p.10). The Internet as an information technology rises in importance in today’s society, as netizens are easily to trust in the power of the Internet to hide from the larger societal context. Emphasizing this context and demonstrating how the power of Internet has shaped and how it continues to shape is the subject of University of Illinois communication professor Robert Waterman McChesney’s new book, Digital Disconnect. The subtitle of the book, How capitalism turning the Internet against democracy, clearly introduces the whole purpose of the book: how capitalism has leveraged the Internet to undermine and weaken democracy. The statement is quite clear in revealing that capitalist world in which the Internet has developed portends a pale future for the Internet and by extension for democratic prospects.

Author Robert Waterman McChesney is a communication professor at the University of Illinois. His research mainly focuses on the history and political economy of communication and emphasizing the roles media play in democratic and capitalist societies (p.xiv). The book Digital Disconnect: How capitalism turning the Internet against democracy is McChesney’s recent publication, which describes how the Internet and media landscape have evolved in the ensuing years and how do they manage commercial pressures and public policy. At the same time, the book also demonstrates an excellent analysis of “the problem where a medium with the capacity to empower people is itself becoming a tool of social control” (Daily Kos, Praise for Digital Disconnect). Additionally, McChesney hopes that “battles over the Internet are of central importance for all those seeking to build a better society” (p. 232).

Based on this hope, McChesney has divided his book into seven chapters to analyze how “the Internet fail to ground it in political economy [and] fail to understand the importance of capitalism in shaping and, for lack of a better term, domesticating the Internet ”(p.xiii). McChesney gives a clear account of the ‘digital age’ and sets the stage by assessing why both Internet “celebrants” and “skeptics” fail to acknowledge capitalism as the driving force in affecting the role of Internet in contemporary society in the beginning chapter. Also, McChesney considers that “[t]he democratization of the Internet is integrally related to the democratization of the political economy. They rise and fall together” (p.22). This statement shows that the Internet has gained paramount social importance, and the issues of political economy approach in which “really existing capitalism” constrains the possibilities of democratic life in the Internet age. Does capitalism equal democracy? Chapter 2 brings many formative Americans’ view of how capitalism is affecting contemporary American society. On one side, McChesney thinks, “capitalism is the optimum regulator in most areas of the economy, that the profit system works, and that it is in everyone’s interest to encourage something as close to that system as possible” (p. 24). On the other side, he points out that capitalism has produced a “golden age of insincere communication” which is “a toxic environment for democracy, and it flames the flames of cynicism,” leading to mass depoliticization (p.59).

McChesney investigates the media communication systems and emphasizes the role of government policies in establishing and maintaining media communication systems in Chapter 3. Additionally, McChesney turns his attention to that “American history is rich with popular involvement with communication policy making” and “in the coming decade there will be a series of policy debates that will be crucial for the fate of the Internet” (p.92). McChesney gives a clear picture on how capitalism conquered the Internet and how media companies continue their dominance in the Internet age with copyright, digital rights management, and proprietary systems in Chapter 4. Also, he details how Google, Apple and Facebook have managed to survive and ever prosper in the Internet era by their domination of the corrupt policymaking process in Chapter 5. All in all, McChesney briefly explains how the Internet, once seen as an engine of economic competition, has become arguably the greatest generator of economic monopoly in history, with troubling implications for both the economy and political democracy. McChesney in Chapter 6 focuses on the subject of journalism and Internet age and addresses on the question of how the Internet has assisted in destroying journalism as it has been practiced for the past century. He singles out online nonprofit news media as a small bright spot among the sea of darkness, which displays that “the key institution that would keep people informed of what was taking place and give citizens the capacity to resist tyranny and protect their freedoms” (p. 171).

Therefore, the last chapter provides some concluding thoughts on capitalism, journalism, the Internet and democracy, offering a set of basic policy reforms, including strict regulation of advertising; limits on ownership of broadcast media; expansion of nonprofit and publicly supported media and journalism; and stricter regulations controlling online privacy and surveillance, which directly shows the sweeping power of the Internet for the public. At last, McChesney summarizes that higher standard of living for most Americans is because “capitalism is not a sane political economy” (p.225).

Throughout the book, McChesney excellently applies theories of political economy approach, which not just highlights the view of “an understanding of capitalism and its relationship to democracy” (p. 13), but also shows the gap between the evolution of the Internet and its current state as deriving from a “failure to appreciate fully that the Internet would be in direct conflict with hierarchical capitalist power” (p. 97). McChesney begins with a simple but powerful overview by claiming that most assessments of the digital revolution have failed to situate Internet in political economy and in understanding the importance of capitalism (p.xii). By examining “[t]he ways capitalism works and does not work (p.13),” McChesney is critiquing capitalism that, “determine[s] the role the Internet might play in society”(p.13). This not just indicates that capitalism has came to dominate the Internet but it also reminds that the Internet has never been the sole player in forming its transformative power in today’s society. Based on this, he points out “[Internet] celebrants often believe digital technology has superpowers over political economy” (p.15), which could be a problem. He believes that the digital revolution has done nothing to ease U.S. labour, capital and income inequality; instead of “the giant evil and danger in this country, the danger which transcends all others”(p.55). What he means is– the digital revolution could breed and exacerbate various kinds of social ailments like aggravating the disparity in wealth distribution. Moreover, McChesney maintains that continual extensions of copyright, lackluster enforcement of anti-monopoly regulations, an ever weaker “free press,” and the expansion and consolidation of Internet power, along with the continual onslaught of advertising and public relations — the hallmarks of “really existing capitalism”– now pose grave risks to key democratic institutions (p.221 -223). This briefly not only introduces the centrality of technological development in capitalism, but also shows the bridge between capitalism and democracy.

Digital Disconnect covers many topics, such as the Internet, democracy, journalism, advertising and capitalism, which offers an excellent view to understand the importance of corporate capitalist control of media today. McChesney provides a sophisticated and transparent description of the political economy in United States, which not only appeals to non-academic readers, but also offers a better and more complete view through rendering an astute political economy of journalism, communications and media. Although many facts and history that the author brings up are interesting and greatly support his main points, the history and data themselves are so enthralling that they distract the audience from focusing on the subjects that really matter, which would be the weakness of the book.

First of all, the lack of a more solid theoretical foundation of Digital Disconnect is sometimes felt as jumping haphazardly from one topic to the next, and as a bombardment of facts and assertions, the theoretical link remains opaque. For example, McChesney excellently accounts the dwindling editorial and journalistic positions across the United States by telling the Peoria Journal-Star in Illinois whose “editorial staff was slashed in half since 2007 when GateHouse Media had purchased it” (p. 177). Then, He goes on to report that the company paid $1.4 million in executive bonuses, and in general large newspaper-owning firms have been giving their CEOs generous compensations (p.177). After reading through this part, it’s really hard to find the main argument, and the two separate facts mix up together and cause confusion for its audience.

Also, McChesney leaves the deep political and social implications of his analysis unclear and there are foundational mistakes throughout the article. Like McChesney’s conception of political economy, he sees market valuations as proof of where power lies. The fact that the system of protocols have no definite ownership, and that it allows people to connect through Internet freely without requiring permission from anyone, have opened a vast space of non-market value and power just don’t fit with McChesney’s position.

Furthermore, both final chapter and the conclusion of this book are also overly broad. For instance, McChesney recommends the reform in his final chapter, including the regulation of digital monopolies, public investments in journalism, stricter advertising and privacy rules, and protections against warrantless surveillance. One doesn’t have to share his leftist politics to endorse these sensible measures; the question is, who will enact them? McChesney does not give a very clear explanation. As well, McChesney argues that the 2008/2009 economic collapse and the continuing economic crisis reveal that “The system is failing, conventional policies and institutions are increasingly discredited, and fundamental changes of one form or another are likely to come, for better or worse” (p.221). The fact is that the media and telecom institutions have been widely criticized, but they’ve yet to be discredited. For McChesney, his suggestion is to simply fix the system by “revolt”, which is a proposal that sounds way too naive and superficial. McChesney does not propose some substantial suggestions; instead, he points out their unlikeliness to be concerned by politicians.

Overview the book Digital Disconnect: How Capitalism is Turning the Internet Against Democracy, Robert W. McChesney defines “how Americans—including scholars, concerned citizens, activists, journalists, and policy makers—view the Internet and lay out what many of the relevant issues are” (p. 4). For students, Digital Disconnect could be greatly appreciated for its depth and complexity in interpreting capitalist control on the Internet, or media in general. The book demonstrates its main points by set examples on how Internet is used by government to manipulate elections and to prevent the development of democracy. For media activists, McChesney brings the clear idea and substantive analysis of how capitalism undermined a potential for democratic media and the democratic project. Therefore, Digital Disconnect is an important book for students and media activists to read since it provides some fascinating and interesting ideas about how the Internet isn’t aiding democracy, which may change our conceptions regarding public journalism and further motivate us to challenge corporate culture within the frame of the Internet.