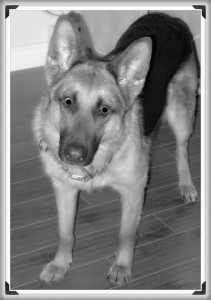 On Tuesday morning, after breakfast, I left my house and headed towards the school while carrying a big black garbage bag. I always dump my garbage on my way to the school because there is a dumpster located between my home and the school. I threw the bag into the dumpster, and then hurriedly left the garbage site.

Later that afternoon, I went back home from school as usual. There was a crowd of people gathering together and chatting with each other near the dumpster. “What’s happening there?” I was very curious so I brushed aside few people and walked inside the landfill.

Wow, a garbage bag?” I thought to myself. There was a big open garbage bag in front of the crowd. Suddenly, a dog’s head rolled out of the bag!! “Oh, my goodness!” “Eeeek!” I screamed in terror.

The decapitated head shocked everyone, including myself. What’s more strange was the fact that the landfill area has already been filled, yet this garbage bag is … is the only thing that still remained…! This region had just been run over by a road roller, but the garbage bag turned out to be intact. Perhaps, the dog’s soul was still lingering near the area. The crowd was scared, and someone called the police to investigate.

It was not until 4 pm when I finally got home. I felt a bit tired, so I went to bed to take a nap. I used quilts to cover my head and slowly I fell asleep. When I woke up, it was already 8 pm. The sun has already gone down and it was already dark outside. I still felt tired, but I did not want to do anything, so I walked to the living room and grabbed the television remote control from the table and turned on the television. The city news was on: “The weird incident of a dog’s head appearing in the landfill at the city of New Westminster today… there was a dead dog without its body found by staffs from the landfill and the dog’s head looked quite cruel” … “Here are the photos of the dog, dog’s owner please contact us at 604-xxx-xxxx…” The dog’s body and its severed head was shown in the news, but blurred out due to the graphic nature of the photo.

Oh, my god! I was talking to myself. I quickly stood up and turned off the TV. However, when I looked up, I saw the dog’s face appeared on the TV screen! The dog’s eyes were blinking and it seemed to be looking for something until it saw me. Suddenly, its eyes stopped blinking and stared at me intensively.

I was so scared that I nervously took a step back. I grabbed an ashtray from the coffee table and smashed the television as hard as I could. Bang!!!!!!!!!! The ashtray shattered into pieces with a loud sound. But, despite my best effort, the ashtray did not even cause a scratch on the TV screen. I was stunned, so I ran into the bathroom as fast as I could. I turned on the faucet to wash my face.

My brain still cannot processed what just happened, and I murmured to myself, “This cannot possibly be real” “This cannot be real”…Ah!!!”

After I cleaned my face, I looked up the mirror on the wall.

All of a sudden, I heard the sound of a dog barking: “Woof, Woof, Woof”

The dog’s face appeared again, but this time was in the mirror! I quickly picked up a low stool from the corner of the bathroom and threw it into the mirror.

“Where should I stay now?” I do not know, since there are mirrors in both my bathroom and bedroom. Finally, I decided to go back to the living room. Fortunately, the TV screen had been restored to normal, and is currently playing the prime soap opera. Thus, I sat down on the sofa, watched television for a while before turning it off. Then, I took a little break and made my way to the kitchen to get a snack. I thought about what I should do, and went back to the living room. I laid down on the couch and my eyes began to give in, as everything in my perception began to disappear again. About an hour later, I opened my eyes…

“Woof, Woof, Woof” There was the sound again. I looked up and let out a loud scream, as I caught a clear glimpse of the dog’s face being reflected off the white surface of the coffee table.

The dog’s head was separated from its body and the body of the dog was nothing more than a pile of white bleeding bones. I could even smell the familiar kind of rancid odor with some blood from the garbage dump. I was petrified! I got up, crawled backwards and started to cry. In the end, I crouched in the corner, with my legs curved, holding a big cushion, and buried my face in it. 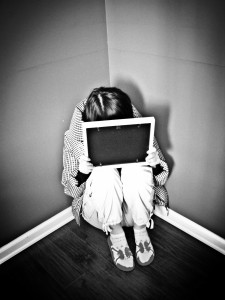 After a while, I stopped crying. The illusion of the dog seemed to have disappeared. I quickly stood up from the corner and ran to the door, but the handle of door could not be moved, which prevented me from opening the door.

I crawled back to the corner again but the dog relentlessly kept barking and roaring towards me. 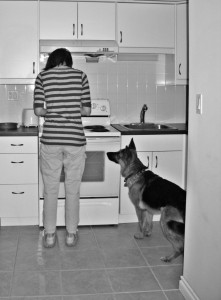 As if it understood me, the dog’s head slowly moved towards me, as I curled myself in the corner. Just as it approached me, it suddenly opened its mouth, revealing its canine fangs and pointed them straight at me. All of a sudden, it sprung towards me and I let out one last scream, as it took its revenge, by using its mouth to devour my body.